Thou art a sea of compassion and our errors are but a drop of tainted water. Surely one drop cannot disturb an unencompassable sea. 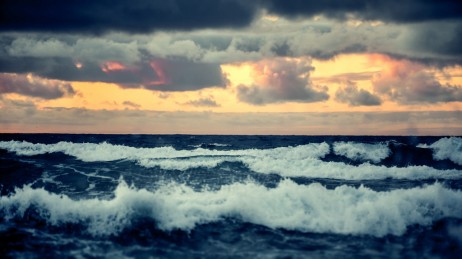 The Divine Liturgy is truly a heavenly service upon earth, during which God Himself, in a particular, immediate, and most close manner, is present and dwells with men, being Himself the invisible Celebrant of the service, offering and being offered. There is nothing upon earth holier, higher, grander, more solemn, more life-giving than the Liturgy.                   – St. John of Kronstadt

O Giver of all good things, O fountain of healing and treasure of compassion, Thou only good and kindhearted God, Who ever grantest good things to those who ask! I beseech Thee, that Thine abundant grace might descend upon me and gather together my mind and heal my hidden sores anew, for distractions and wandering thoughts constantly renew my secret sores.

O long-suffering Lord Who ever curest with grace and compassion, heal the great spiritual infirmities that are within me, a sinner!…       – St. Ephraim the Syrian

“The candles lit before icons of saints reflect their ardent love for God for Whose sake they gave up everything that man prizes in life, including their very lives, as did the holy apostles, martyrs and others. These candles also mean that these saints are lamps burning for us and providing light for us by their own saintly living, their virtues and their ardent intercession for us before God through their constant prayers by day and night. The burning candles also stand for our ardent zeal and the sincere sacrifice we make out of reverence and gratitude to them for their solicitude on our behalf before God.”

Turn your mind towards Him continually. Learn to love prayer, familiar converse with the Lord. What counts above all is love, passionate love for the Lord, for Christ the Bridegroom. Become worthy of Christ’s love. In order not to live in darkness, turn on the switch of prayer so that divine light may flood your soul. Christ will appear in the depths of your being. There, in the deepest and most inward part, is the Kingdom of God. The Kingdom of God is within you [Luke 17:21].”          – St. Porphyrios

“The Church, through the temple and Divine service, acts upon the entire man, educates him wholly; acts upon his sight, hearing, smelling, feeling, taste, imagination, mind, and will, by the splendour of the icons and of the whole temple, by the ringing of bells, by the singing of the choir, by the fragrance of the incense, the kissing of the Gospel, of the cross and the holy icons, by the prosphoras, the singing, and sweet sound of the readings of the Scriptures.”

…Everyone knows that a church calls for reverence, for a collecting of thoughts, for deep thinking about God, and for standing in the presence of God, but who fulfills this? People go to church with a desire to pray, to stand in it for a while with warm fervour; but then thoughts begin to wander, and bargaining begins in one’s head even louder than that which the Lord found in the Jerusalem temple.

Why is this so?

Because the way one stands in church is a reflection of one’s entire life. As people live, so do they behave in church. A church influences and somewhat supports spiritual movements; but then the usual course of one’s spiritual constitution takes over.

Therefore if you want your time in church to consist of worthily standing in the face of the Lord, prepare for this in your ordinary life; walk, as much as you can, in a prayerful frame of mind.

This labour will bring you to the point that in church also you will stand reverently all the time. This reverence will inspire you to be reverent in your ordinary life as well. Thus you will walk ever higher and higher. Say, ‘O Lord, help’ —and begin!                            – St. Theophan the Recluse

A portion of a sermon given by St. Gregory Palamas on the Feast of the Entrance of the Theotokos into the Temple:

…Now, when Righteous Joachim and Anna saw that they had been granted their wish, and that the divine promise to them was realized in fact, then they on their part, as true lovers of God, hastened to fulfill their vow given to God as soon as the child had been weaned from milk. They have now led this truly sanctified child of God, now the Mother of God, this Virgin, into the Temple of God. And She, being filled with Divine gifts even at such a tender age, … She, rather than others, determined what was being done over Her. In Her manner She showed that She was not so much presented into the Temple, but that She Herself entered into the service of God of her own accord, as if she had wings, striving towards this sacred and divine love. She considered it desirable and fitting that she should enter into the Temple and dwell in the Holy of Holies. 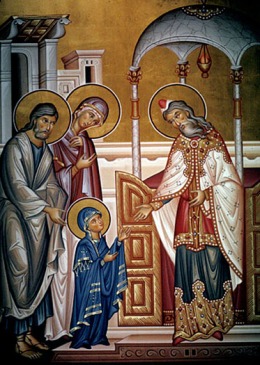 Therefore, the High Priest, seeing that this child, more than anyone else, had divine grace within Her, wished to set Her within the Holy of Holies. He convinced everyone present to welcome this, since God had advanced it and approved it. Through His angel, God assisted the Virgin and sent Her mystical food, with which She was strengthened in nature, while in body She was brought to maturity and was made purer and more exalted than the angels, having the Heavenly spirits as servants. She was led into the Holy of Holies not just once, but was accepted by God to dwell there with Him during Her youth, so that through Her, the Heavenly Abodes might be opened and given for an eternal habitation to those who believe in Her miraculous birthgiving.

So it is, and this is why She, from the beginning of time, was chosen from among the chosen. She Who is manifest as the Holy of Holies, Who has a body even purer than the spirits purified by virtue, is capable of receiving … the Hypostatic Word of the Unoriginate Father. Today the Ever-Virgin Mary, like a Treasure of God, is stored in the Holy of Holies, so that in due time, (as it later came to pass) She would serve for the enrichment of, and an ornament for, all the world. Therefore, Christ God also glorifies His Mother, both before, and also after His birth.

We who understand the salvation begun for our sake through the Most Holy Virgin, give Her thanks and praise according to our ability. And truly, if the grateful woman (of whom the Gospel tells us), after hearing the saving words of the Lord, blessed and thanked His Mother, raising her voice above the din of the crowd and saying to Christ,“Blessed is the womb that bore Thee, and the paps Thou hast sucked” (Luke 11:27), then we who have the words of eternal life written out for us, and not only the words, but also the miracles and the Passion, and the raising of our nature from death, and its ascent from earth to Heaven, and the promise of immortal life and unfailing salvation, then how shall we not unceasingly hymn and bless the Mother of the Author of our Salvation and the Giver of Life, celebrating Her conception and birth, and now Her Entry into the Holy of Holies?

Now, brethren, let us remove ourselves from earthly to celestial things. Let us change our path from the flesh to the spirit. Let us change our desire from temporal things to those that endure. Let us scorn fleshly delights, which serve as allurements for the soul and soon pass away. Let us desire spiritual gifts, which remain undiminished. Let us turn our reason and our attention from earthly concerns and raise them to the inaccessible places of Heaven, to the Holy of Holies, where the Mother of God now resides.

Therefore, in such manner our songs and prayers to Her will gain entry, and thus through her mediation, we shall be heirs of the everlasting blessings to come, through the grace and love for mankind of Him Who was born of Her for our sake, our Lord Jesus Christ, to Whom be glory, honor and worship, together with His Unoriginate Father and His Coeternal and Life-Creating Spirit, now and ever and unto ages of ages. Amen.